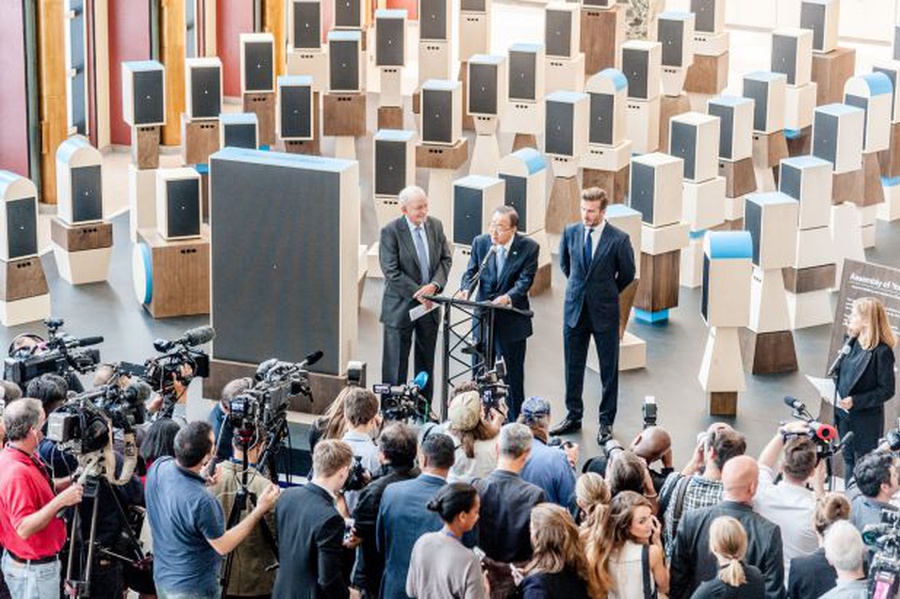 By the end of the decade it’s predicted that 5.5 billion of us will have access to a mobile phone, so it’s no surprise an organisation like Unicef – which operates in no less than 190 countries – has been turning its attentions to mobile.

“We see it as a driver to connect young people to information, connect them with opportunities and give them access to choice,” he says. “Speed, breadth and access – all three make mobile a vital tool, with the most appealing work allowing us to create information loops that can lead to action.”

With almost two million active users, its text message-based tool U-Report has increasingly become a vital cog in the wheel. Starting out as a local innovation to help Ugandans engage on issues that affect their lives, young U-Reporters from 18 countries, mostly in Africa, are now using it to share opinions, connect with leaders and help transform their communities.

“U-Report has enabled us to help change legislation by aggregating the voices of those on the ground and putting them in front of government,” says Fabian.

“We found a banana plague just by asking people if the leaves on their trees were turning yellow and mapping that information in real-time. That kind of acute action is important in a world that’s changing as fast as ours.”

Unicef Goodwill Ambassador David Beckham at the opening of Assembly of Youth 2015, where data drawn from U-Report was displayed in a digital installation in collaboration with Google

Last year U-Report celebrated one of its biggest successes so far, exposing a ‘Sex 4 Grades’ scandal at schools in Liberia after Unicef staff caught wind of a possible problem but didn’t have any data to back it up. Working in partnership with the Ministry of Education and the Ministry of Gender, U-Reporters in Liberia were asked via text if they thought teachers exploiting children by awarding grades or pass marks in return for sex was an issue at schools in their community. In less than 24 hours 13,000 people had responded, with the vast majority (86 per cent) confirming Unicef’s suspicions.

“Within days we had enough data for action and we were able to work with the government, set up a taskforce and create action immediately. For us, that is the most effective use of mobile.”

To keep innovating Unicef works with partners from the creative and tech world, with Fabian explaining these projects are not always ‘pro-bono’ but instead stemming from a shared business need, citing Unicef’s work with Google Creative Labs as a recent example.

Joining forces, Google helped Unicef create a digital installation for the United Nations which delivered personal messages from children and young people across the globe directly to world leaders. The messages highlighted the challenges they face in their homes and communities, including poverty, violence, disease and conflict. Unveiled at the opening of the Assembly of Youth in 2015, the data displayed in the installation was drawn exclusively from U-Report and Unicef social media channels.

“In cases like this it has to be a true partnership,” says Fabian. “It was a very deep, technical and creative partnership between our team and theirs and it took around three months to put together, which was slower than I’d like. We have to keep trying to go faster because there is a lot of stuff to do.”

To assess the issue Unicef has since invited technology startups to apply for funding from its Innovation Fund. “The purpose is to invest in open source technologies that benefit children and come from developing economies.

“We’ll be identifying opportunities from countries around the world… We’re hoping to identify communities of problem solvers and help them develop simple solutions to some of the most pressing problems facing children.”

In particular Unicef is looking for proposals that cluster under products for youth under 25; real-time information tools for decision making; and infrastructure to increase access to services and information of particular interest.

“These three areas are ripe for investment due to rapidly changing technologies such as blockchain, 3D printing, wearables and sensors, artificial intelligence and renewable energy.”

Of what the future holds for Unicef, Fabian admits mobile is, perhaps, more of a challenge for the organisation thanks to its 70-year heritage.

“When you’re built on a certain understanding of how the world moves and then it starts moving a whole lot faster, it’s testing to keep up.

“It’s important to have the right team to keep the gears moving. Understanding the real-time data – even if it shows you’re doing something wrong – means you can adjust rather than waste time. That’s the challenge mobile brings, but it certainly allows you access to a different vision of the world.”