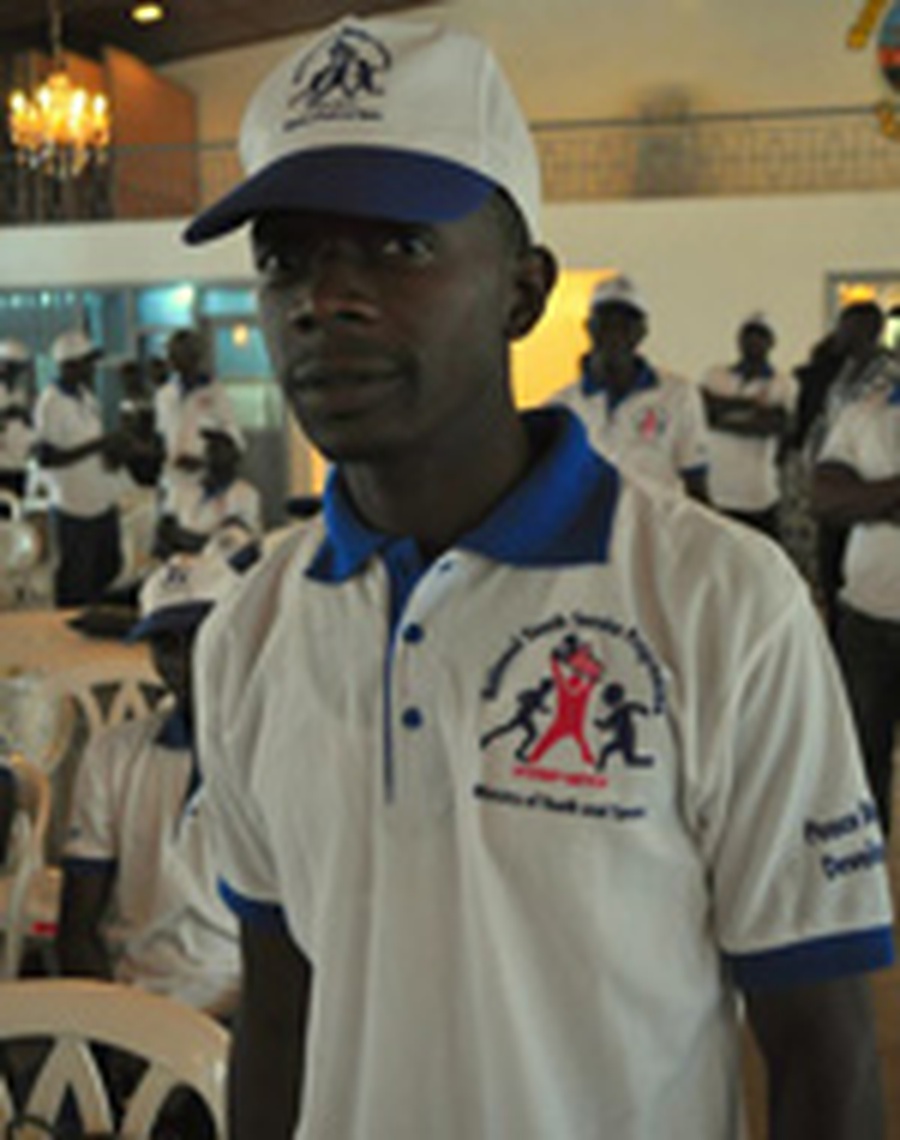 For Emory Juty Jacobs, the decision to become a National Volunteer was easy.

“I had a university degree, and I needed work experience. When I heard about the National Volunteers programme, I knew that was what I wanted to do: get that experience, while also giving back to Liberia," said the 31-year old computer science graduate, who hails from River Gee County in south-eastern Liberia.

After serving a one-year term volunteering in communities along Liberia’s Ivorian border county of Grand Gedeh, Emory joined 175 of his “fifth batch” of National Volunteer counterparts in Paynesville, Montserrado County on 17 July to receive certificates of thanks for their service. Like others in his cohort, Emery was selected, trained and deployed through an innovative programme supported by UNICEF that seeks to put youth at the centre of peacebuilding at the community level in Liberia.

The National Youth Service Programme (NYSP) seeks to reverse the negative effects of Liberia's long conflict on communities by combining peacebuilding and development efforts, and to empower young Liberians to become key actors in institutional strengthening, public service delivery, private sector development and social cohesion. High-school-educated Junior National Volunteers are trained separately to support peacebuilding activities and conflict resolution at the community level. The Government launched a two-year pilot programme in 2008 in six counties. Since UNICEF took the lead on the programme in 2011, 484 National Volunteers have been trained and are now deployed 12 counties nationwide.

In speeches delivered throughout the morning graduation ceremony, government officials, UNICEF and other representatives of international organizations supporting the programme praised their service, hailed them as a new generation of Liberian leaders, and reminded them of their future potential.

“All of you have dedicated a year of your lives to volunteering for your country. We can all agree that your hard work has made an incalculable contribution to the processes of peacebuilding and strengthening Liberia,” said Tatjana Colin, Acting Deputy Representative for UNICEF Liberia. “Now, as you go out onto the job market, you will be seen as candidates with something truly unique to offer – real, practical work experience and a proven commitment to service.”

“You are part of a new breed of Liberians who have exhibited the dedication to change our country – and we thank you,” said Wilfred Johnson, Director of the Liberia Peacebuilding Office, another programme supporter.

Liberia was left shattered by more than a decade of war. Schools and other physical infrastructure were destroyed, agricultural production ceased, and social services delivery had all but stopped. But beyond these physical scars, war had also ripped apart the social fabric of the nation, leaving deep divisions and a generation of youth marginalized in its wake. Deprived of access to formal schooling during the war, and with many continuing to lack technical skills, youth suffer the most from the country’s high unemployment rate, which some estimate at over 65 per cent. With 75 per cent of Liberia’s population falling below 35 years of age, this leaves the largest and most potentially active segment of society disempowered, and without the means to support themselves or their families. The NYSP seeks to reverse that trend by empowering youth to lead peacebuilding efforts at the community level, while also providing much-needed training and work experience.

Working closely with county-level government offices and other partners, National Volunteers are university graduates under 35 years of age who are selected through a competitive process and trained to provide support in four key areas: education, health, agriculture, and youth development. For the agriculture component, National Volunteers provide training and support to youth specifically identified as “at risk” – a unique programme element that offers an added level of empowerment for marginalized youth, while also helping to rebuild Liberia’s fragile food production systems.

Before deployment in their area of specialization, every National Volunteer is also trained to promote peacebuilding and conflict resolution at the community level. In this way, not only are Volunteers helping to rebuild their country’s broken infrastructure and social services system, they are also working to mend the social fabric of the nation, and doing their part to foster national reconciliation.

“I tell them that we are all Liberians,” said Emery Juty Jacobs, when asked about his approach to peacebuilding during his year of service in Grand Gedeh County, where he taught computer skills as well as leading dialogues and activities on violence reduction. “I tell them we have to solve our problems together.”

Like Emery, National Volunteer Mardea Yalloh, age 27, also put her peacebuilding training to use to improve social cohesion at the youth level. While serving her year as a teaching assistant in a Bong County junior high school, Mardea mobilized her students to take part in dramas and role plays to learn how they too could begin to repair some of the community’s broken social ties.

“I know that we were able to change some negative attitudes because we saw people getting along who hadn’t been able to before,” Mardea said. “That’s how I knew we were doing some positive things.”

That positive change is measurable in other ways as well. This is particularly true in the education sector, which has recorded some impressive gains. Over the past year, the quality of teaching, the number of students enrolled, and the percentage of teachers holding a university education have all improved in the 52 schools where National Volunteers are working. Principals have said that they would be unable to teach mathematics and science without the support of the Volunteers, while other schools have been able to add 11th Grade instruction to their curriculum, which has in turn increased enrollment in some schools by as much as 150 – an increase made possible and supported by the National Volunteers.

The impact of the programme on the Volunteers themselves is also clear. Each National Volunteer receives a monthly living allowance of US$200, which is significant in a country where poverty rates are incredibly high. But more importantly, they also gain significant work experience and targeted training. The result: a better standard of living in the short-term, and improved career opportunities in the long-term.

“I decided to become a volunteer because I wanted to serve my country and to improve my own chances of success,” said Mardea, as she proudly posed with her certificate at the Paynesville ceremony marking the completion of the 5th cohort’s year of service.

For Emery, reflecting on his year of service, the motivation to volunteer was also of a personal nature.

“The money is nothing – I did it all from my heart,” Emery said.

A sixth batch of 150 National Volunteers is currently undergoing training, and will be deployed to the field later in August. New to this year is a fifth programme component in juvenile justice, in which Volunteers will provide targeted support to the often-overlooked juvenile population of Monrovia Central Prison. Like their predecessors, this new batch of volunteers will also be putting their hearts into a mission larger than themselves – rebuilding their country, fostering reconciliation, and proving that youth can play an active influencing change.

“The question has been asked: what’s next. The answer is you,” said Acting Minister of Youth and Sports Jacqueline M. Capehart, closing the graduation ceremony. “The skills you have acquired should enable you to step up and achieve the highest goals – for yourselves, and for the continued growth of our country.”