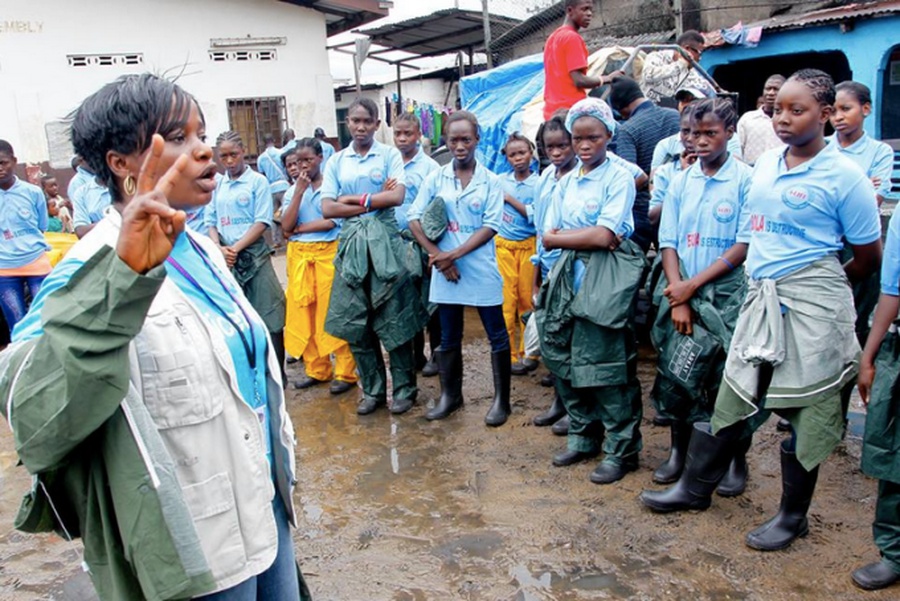 [Editor’s note: This guest post is written by Sebastian Muah, Erica Kochi and Christopher Fabian. Sebastian is the Managing Director of Liberia Telecommunications Corporation and the ICT Lead for the Ebola Response in Liberia. Erica and Chris co-lead UNICEF’s Innovation Unit. Christopher is on the ground in Liberia, working with UNICEF to adapt technology to the emergency response, and Erica is coordinating the UNICEF’s work with global tech companies to ensure that new solutions are available and relevant.]

In our highly interconnected world, stopping Ebola is on everyone’s mind. The tech community has a significant role to play in the response because it offers solutions that can scale at the same rate as Ebola’s exponential growth. Many are already wondering how they can contribute. Over the past few weeks UNICEF has been contacted by more than 50 technology companies about the Ebola response.

Unless we move faster, the Ebola outbreak ravaging communities across West Africa will continue to spread. To turn the tide against Ebola, we need to address it at its source – in Guinea, Liberia and Sierra Leone where there are currently 1,000 cases a week with death rates of approximately 50 percent.
Well-Intentioned But Not Useful

As with every emergency, well-intentioned efforts don’t necessarily translate into useful contributions: a company offers to donate several thousand smartphones to the response in Liberia. The problem is that Liberian 3- and 4G networks are very thin outside of the capital city, power sources for energy-hungry devices are hard to come by, and a four-hundred dollar handset is worth more than two month’s wages. Again, context is king. The best way to drive immediate, exponential change in communities ravaged by the Ebola virus is to work with technology that is already accepted by its ecosystem such as voice and SMS on feature phones. Solutions on established technologies scale quickly.

Dumping hardware into low infrastructure environments doesn’t work very well, but what works, what is useful and how can the tech community effectively contribute to stopping Ebola?

User Networks: If your technology has many active users in Ebola-affected or the surrounding countries, there is an opportunity to use your platforms to get these essential messages out by partnering with organizations such as UNICEF who are working on the communication response. There are a couple of ways to do this:

Communicating with the general public in Ebola affected countries, and mobilizing them to prevent, care for the sick, and control it in their communities is key to stopping Ebola. This is especially true in countries where health systems are weak and where the sick are being turned away at over-full and understaffed treatment centers. Liberia, for example, has fewer than 200 doctors to cover a population of over 4 million people.

UNICEF leads communication and social mobilization for the Ebola response and is working closely with governments, other partners, and communities themselves to get these messages out. We are training volunteers to go door-to-door, delivering information through radio and other traditional media, and adapting mobile solutions that have shown results in other countries in Africa. mHero – a solution that uses simple mobile phones to connect the government to frontline health workers using SMS (text messages), and a similar system called U-report, already running in six other African countries, that connects hundreds of thousands of young people to vital information and services through text messaging and voice services, are being rolled out to support the response.

The Ebola response needs experts to go in, assess, and recommend how to strengthen the telecommunication networks. The tech community with this specific expertise can volunteer their staff or support the the UN Mission for Ebola Response (UNMEER), the World Food Program (WFP) (the traditional telecommunications lead in emergency responses), andNetHope (a consortium of 18 humanitarian NGOs that are supporting the Ebola telecommunications infrastructure response), and form strong partnerships with local mobile network operators that leverage the existing infrastructure, and help introduce stronger networks for the future.

A strong telecommunication infrastructure is one of the keys to a strong Ebola response. People need to be able to know what they can to do to protect themselves, care for their loved ones, and get help. Health systems need to be able communicate with frontline workers, know where to send supplies, know if those supplies have arrived, and hear about what’s working and what’s not in a constantly changing environment.

GSM networks in Ebola-affected countries are struggling to cope with the crisis for two reasons: already weak networks are being overloaded by a higher volume of calls and texts, and the fact that the staff who maintain these networks are having to turn their attention to dealing with Ebola in their own communities. Outside of Monrovia – the capital of Liberia – it’s taking over an hour to place a call and a few days for a text message to be delivered.

If you are a developer or designer and want to help, now is not the time to build a new app or solution for the Ebola response without understanding what is going to be most helpful on the ground. If you were a start up or tech platform experiencing a crisis, you wouldn’t just bring in outsiders without any knowledge of the specifics of your problem to fix it. The same applies for the Ebola response. There are however many effective ways to help with the Ebola response.

Most importantly, turning the tide against Ebola requires money – for protective gear for frontline workers and caregivers, for Ebola treatment centers to be built, for training and deploying volunteers to care for the sick and collect and safely bury the dead, and for essential communication and mobilization efforts to get the right messages out. The Secretary-General of the UN put out an appeal for just under $1 billion in September to step up the global response, and as of the 17th of October the response had only received $377 million.

It can be hard to know which organization to financially support when almost every not-for-profit seems to be planning an Ebola response. Your donation will go a lot further if you give to organizations who have staff and existing programmes on the ground and are already well integrated into the overall country responses. The UN, coordinating the global response, has a list of UN organizations and other partners who are on the ground responding to the Ebola crisis.

Ebola’s toll is much greater than the devastating number of deaths. Decreased economic activity has led to spikes in prices of goods where many have had to cut back to only one meal a day. The collapse of social services means people can’t get work, children can’t go to school, and childhood deaths from treatable diseases such as malaria, pneumonia and diarrhoea may soon outstrip those from Ebola three or four times over. The only way to stop Ebola’s spread is to stop it’s transmission in West Africa.  This means delivering strong health and communication systems that are equipped with the right tools prevent and treat the disease.

A Call to Action

There are many things the tech sector can do to help with the Ebola response – but they are not always the obvious, top-of-mind solutions.  Creating an app, as cool as that may be, will on its own, not be able penetrate a market hampered by lack of connectivity and different user interaction models.  Dropping hardware on a weak infrastructure tends to collapse the little existing bandwidth rather than creating new opportunities.  Making a platform for anything built in isolation, far from the problem, without local developers where there is an actual need is a recipe for failure.  The tech community can best help by donating money, staff time, and focused creative brain to organizations already working on the ground, helping them adapt, build, and deploy locally-relevant solutions to a global emergency.

Thanks to Evan Wheeler and Stuart Campo for their comments. All photos: © UNICEF/2014/Liberia/Jallanzo