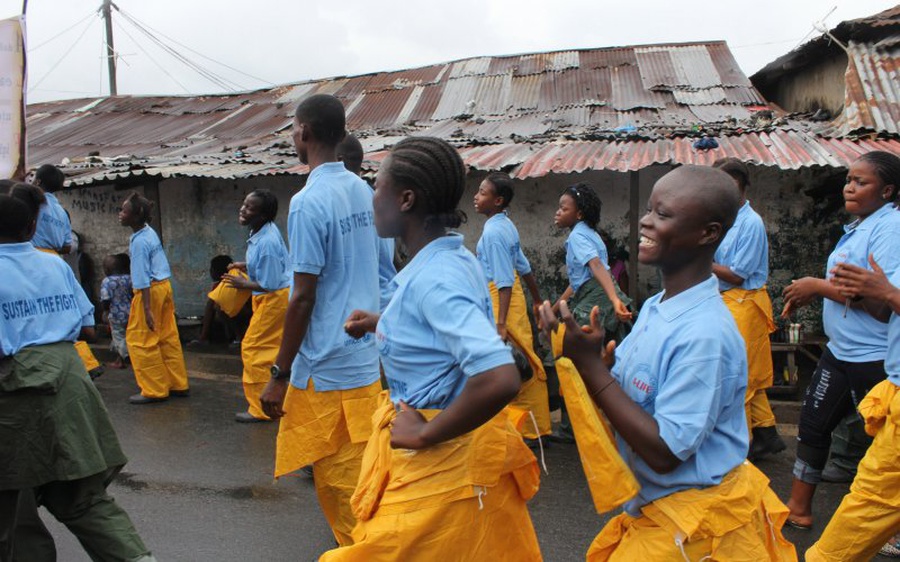 Two hundred girls are weaving in and out of dirty alleys in the seaside slum ofWest Point, Liberia. One man, straddling a large drum, keeps time as their voices rise in song: “Believe it, people, Ebola can kill.” Passers-by emerge from concrete buildings to watch the girls, now nearly dancing down the dirt roads in rows of two. One voice rises above the others: “Let’s come together to stop Ebola.”

The march, held Sept. 17, marked the official launch of Adolescents Leading an Intense Fight Against Ebola, or A-LIFE. Made up of girls aged 16-19 and a handful of boys around the same age, the group was formed to spread awareness and education about Ebola to help curb its spread in their community. The group members came up with the name themselves and launched their mission on their own. They have already reached more than 4,000 homes in West Point.

Of the 10,141 cases and 4,922 deaths from Ebola reported by the World Health Organization this week, more than half are in Liberia. Experts from the WHO say the real toll is likely 2.5 times more than their recorded numbers for cases and deaths in Liberia—which now stand at 4,665 and 2,705, respectively. Guinea, where the epidemic began, has half as many cases as Liberia.

The story of this teenage mission to spread awareness about Ebola began two years ago, when UNICEF launched an educational group for girls in West Point. The neighborhood is extremely dangerous—even in a country with one of the highest rates of sexual and gender-based violence in the world. UNICEF’s group was formed in 2012, with the intention of teaching young girls how to protect themselves from sexual violence.

The worsening of the Ebola epidemic forced them to teach the girls about a new enemy. They learned what the disease is, how people get it, what happens then. Most important, they learned what they could do to protect themselves. Learning that gave them something the rest of their community, still reeling from the violent government-imposed quarantine, did not have: knowledge.

“I could be afraid, but being afraid would stop me from going out to help these people.”

So they walked. From house to house, day by day, teaching the community what they had learned. Ebola is real. It is deadly. Don’t shake hands. Wash them. “They took what they learned and built on it,” says Sheldon Yett, UNICEF’s representative in Liberia. “They embraced everybody, went to everywhere they could find, and discovered new ways to get information across.”

At first the idea of the girls going out into the community was alarming to Hawa Page, a UNICEF staff member now coordinating the group. When A-LIFE began, Page was working on an education and empowerment project with young girls in Liberia. Upon first learning of their mission, Page worried about the girls’ safety. “We were afraid for them,” she tells me. So UNICEF sent in support in the form of a leader in the Ebola education program to give the girls further training and provide them with hand sanitizer, rain boots, and raincoats. A supervisor has been hired to keep track of their work and take their temperature each morning before they go out. “Now that they are wearing the protective gear, I’m not afraid anymore,” says Page.

Carrying education pamphlets and hand sanitizer, the girls are technically only scheduled to spend two days a week going door to door. Some go out three or four days a week—others, says Page, all seven. With schools in Liberia closed indefinitely, there’s not much else to do.

Page, who is with the girls when we speak, says she can “see their enthusiasm, their energy.”

In effort to help me do the same, she puts Jessica T.S. Neufville, an enthusiastic 16-year-old member of A-LIFE, on the phone. “I feel good educating people about Ebola and helping them see how they can prevent themselves from getting it,” says Neufville. “It feels good.” She explains what it’s like going out in the field, why she feels better in long sleeves, and who she calls if someone appears contagious. She’s scared sometimes, she says, but feels better knowing that she has hand sanitizer. It’s tough work, but not too tough to stop: “I could be afraid, but being afraid would stop me from going out to help these people.”

Tough isn’t new to Neufville, or likely any of her peers. West Point, one of the poorest neighborhoods in Liberia, is no one’s idea of an easy place to grow up.

Started as a fishing community, the sandy peninsula became a refuge for those fleeing the country’s bitter 14-year civil war. The population has since thinned somewhat, but the economic scars of the war have not. Densely populated and impoverished, the community was struggling long before Ebola arrived.

The more than 50,000 who reside in West Point live mostly in shacks made of zinc with rusted tin roofs. A lack of clean water and electricity are commonplace. With less than a dozen toilets in the entire community, poor sanitation fuels high rates of malaria and lethal cases of diarrhea. Those who don’t have a “commode” in their house are forced to defecate outside—so many that the government of Liberia recently banned adults from doing so on the beach, though not children.

As the Ebola epidemic began sweeping through the region, fear and mistrust of the health workers in West Point escalated. Four days after a mob overtook an isolation center in August, President Ellen Johnson Sirleaf ordered a mandatory 21-day quarantine on the area. But the quarantine, lifted just 10 days in, was a colossal failure. On top of inciting violence that led to the death of a 16-year-old boy, it was confusing to residents. When it was lifted, some took the shift as a sign that they were right: Ebola wasn’t real.

If it weren’t for A-LIFE, there’s a good chance many would still believe that. According to UNICEF, A-LIFE’s visits to more than 4,000 homes in West Point have spurred new behaviors in the community that are essential to curbing the epidemic. “We see at every street corner in West Point, in front of every shop, people have buckets to wash their hands. They know what they need to do to stay alive,” says Yett. “We’ve seen a real behavior change in these communities, and that’s amazing.”