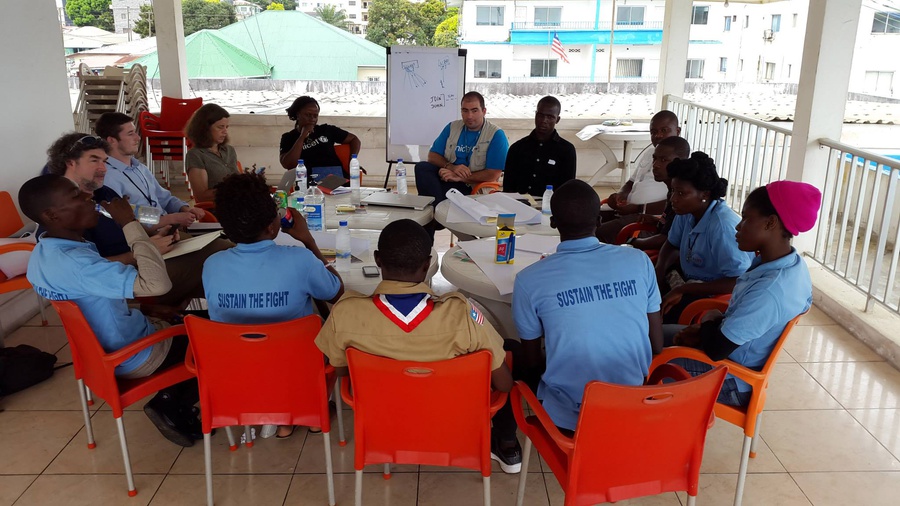 Today we went out with a group of 60 kids, walking through the Westpoint neighborhood of Monrovia, trying to get new users to pick up U-report – a platform for SMS-based youth information flows that we have been working on launching in Liberia for a month.  And it totally failed.

For those who are just tuning in for the first time, UNICEF has been working hand-in-hand (as well as phone-in-phone) with youth from Liberia to create U-report, an SMS/text-messaging-based tool that connects young people around the country to vital information and services. The end result is a two-way communication channel enabling citizens to report on the status of the Ebola situation (and any other concerns) in their local communities directly to the Liberian government, and for the government to respond in real-time with important information.

The free shortcode that we had worked so hard to get activated didn’t work at all.  No new users could join.  (“text 8737 to join!”…psyche! no you can’t…)

When the system for registering users goes down… quick revert to paper. It’s old school, but you can still get phone numbers for later. (Fabian / 2014)

We were so excited to start acquisition that we hadn’t planned our sales pitch.  Our marketing materials weren’t ready.

We printed a few hundred fliers…Without realizing that we’d used the brand colors of *only one* of our network partners. Discard. Fail. #swearWeDidThisBefore (Fabian / 2014)

We had raised the hopes of all these young women, and we would have nothing to show them.

At the end of three hours in the sun, going through one of the most amazing neighborhoods in Liberia, I felt total failure. We had wasted all of our time, and that of our partners, to get to a point where nothing would work.

For the last few weeks people had told us that the mobile network would fail under the load of U-report’s text messages.  We were told no one would be interested in using a system like this. “You guys are wasting your time, and other peoples’.”  And they were right, I thought.

We had totally failed our users, and our partners. And we thought we had it in the bag… (Fabian / 2014)

Evan (UNICEF Innovation’s global technology lead, freshly in Liberia) was on the phone with some of our technical partners, trying to figure out what had failed.  We had just tested everything the day before.

Stuart (UNICEF Innovation’s roving lab lead and technology implementer) was working on mitigation plans with groups we were supposed to meet later that day.

I was standing around looking upset.  I’d written a bunch of blogs about failures before, but this was supposed to be the day that it all worked.  And it hadn’t.

But our alpha users bravely covered a huge amount of Westpoint … undeterred by technical failure. I was pretty sad. (Fabian / 2014)

We went to lunch.  This amazing team that has come together from around the world – and everyone’s faces looked kind of the same.  Surprised that the system hadn’t worked.  Unsure what to do next.  Should we fold this up, and just start working on the mHero project? Drop U-report?  It wouldn’t work.  The restaurant forgot my sandwich order, and no one at the table wanted to start eating.

“Hey.  A user just joined!” said Stuart, looking at his phone more than at his (cooling) burger.

No one was going to jump at that.  It had been a pretty rough week, and one new user didn’t measure up against the hundreds we’d hoped to get from the morning’s work.  Slowly, the table begins to eat their food.

“Um.  Another five people have completed the registration flow,” he said again.  The burger was still getting cold.

We looked at the public U-report site.  It’s getting users – even though no one is out selling it – no one is asking for registrations.

Wait…Who were these users? How were people joining U-report. We had failed… (Fabian / 2014)

“Maybe they’re just coming in from this morning? These were queued up in the system?” suggests Evan.

Another 5 join.  Another 10.  And questions are coming into the backend as well – which the public can’t see – and we start to hear the voices of Westpoint – over text messages.

Questions about relationships come in, SMS’s about serious issues that would need our child protection team to intervene pop up, statements about fun things kids are thinking about – all starting to appear on the administration-side of the site – hidden from the public but giving us the information and basis for the platform.

“Is it free now?” one of the kids asks.  Normally these questions are handled automatically, but we’re sitting around the lunch table watching – so we take administrative privilege and reply:

And more users come in.  We hit 100 during lunch – that had been our target for the morning’s work anyway. But we weren’t advertising.  These were kids telling each other what had happened during our morning session and getting online.

Stuart Campo leads the afternoon session, getting feedback from the morning fail, and getting ready for full launch (Fabian / 2014)

Another unsolicited message pops up:

“Help spread d message n not d virus”  – thanks U-reporter…you’re writing the content for us.

And then I realized something that I love so much about my job.  It’s that feeling of total and absolute fear and dread – where your teeth are grinding because literally nothing is working – because the impossible idea that the team was working on really is out of reach.

Stuart, Evan, and not enough coffee in the world for product launch (Fabian / 2014)

It is the fear of disappointing partners, investors, users, these kids who we have spent a few weeks designing the system with floods over me, and makes me really doubt what we are doing.

And it is the questioning of process – is it really right to be doing all this work in the most difficult environments in the world – to be building so aggressively with users, to be pushing open-source solutions which are weird, janky, un-tried, unknown.

And then something begins to work.  Very small at first, a tiny crackling sound, bellwether and faint.

And I look at the team (both the ones physically together in Liberia, and the global UNICEF Innovation team, spread across 20 countries, all supporting a common task) and it becomes quite clear that it is that ability to be in a space of fear, of failure, and of risk – but to be supported by a network of the best and most capable innovators, entrepreneurs, technologists, builders and UNICEF colleagues in the world – that allows projects like U-report to come to life, and to affect hundreds of thousands of young people.

Westpoint chapter of UNICEF’s Innovation team. A global team – made up of a lot more people than I tend to realize (Fabian / 2014).

I am sad to leave Liberia.  I will be leaving an amazing ecosystem of problem-solvers, including a new team of 3 that we are hiring to ensure this work has continuity and that we can capture learnings and failures going forward.  I am sad to leave before U-report goes to national scale – that is work that Stuart, Evan, Priscilla and others will be doing and writing about in the coming weeks – and there’s a lot of failure space there too.

And mHero, the revolutionary extension of traditional health systems databases with RapidPro will be launching in the next week.  There is a lot more to do, and we will continue to need the help, support, ideas, and inputs of our global team.

#spoileralert : You deserve it for reading this far – and I’m going to scoop Stuart, Evan, and Priscilla’s next blog post a little bit by showing you what we’ve got from the first 220 (!!) U-reporters